Happy St. Paddy’s Day! You’re in for a day filled with…nothing having to do with St. Patrick’s Day whatsoever. Sorry to disappoint? 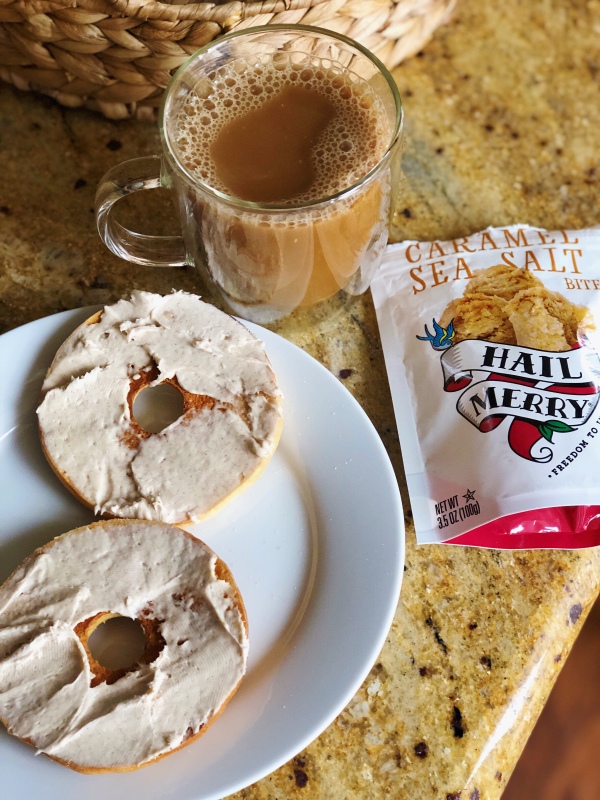 Yes, you read that right: the first meal I ate was after 3 PM today. Jeff left for Virginia this morning, and I found out shortly after waking up that today was not only St. Paddy’s Day, but also “National Sleep Day.” So I took a nap. As you do. After napping, I screwed around for a while doing god knows what, and then finally decided to start my day. I was pretty hungry by this time, so I polished off the last two Hail Merry’s bites, and then finished those damn bagel thins. 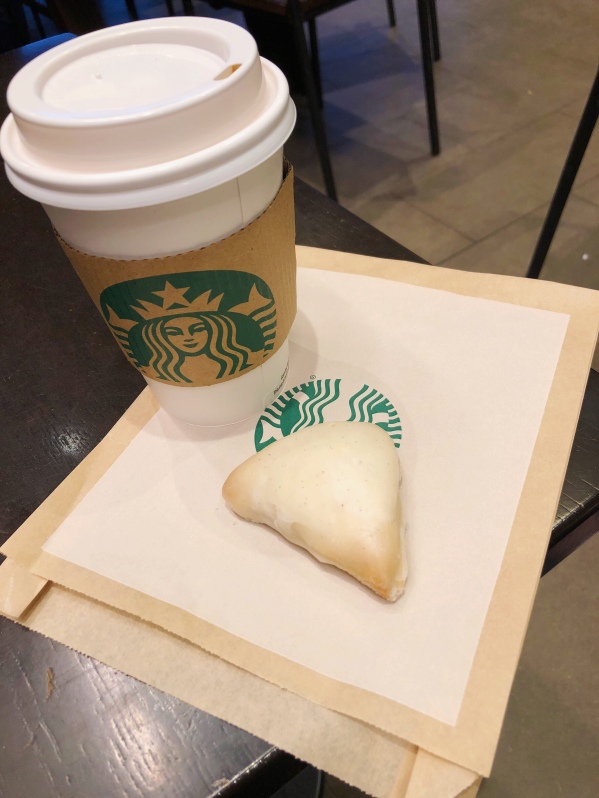 After managing to shower and get myself out of the house (you can congratulate me later), I set out to run a few errands. My eyebrows desperately needed some work (I tend to let them grow out until they’re pretty much beyond hope, then get them waxed even though I always say I’m going to let them grow), and I needed to run to Anthropologie. I recently bought two knobs for our nightstands on sale online, but when they arrived, I realized I actually needed four (they were replacing a pull, so there are two holes on each stand). By the time I realized my error, the knobs were out of stock online, so I headed over to my local store to see if they had any left. They had one, and I probably should’ve bought it and gone to the second closest store (at the mall) to check there, but I decided to just scrap the whole thing and buy different knobs elsewhere, figuring I can use the Anthro knobs on something else.

Anyway (you’re welcome for that fascinating knob story), when I walked in to Anthro, they had a little table set up with mini scones and some sort of beverage at the entrance. They looked delicious, and I decided to wait and grab one on my way out…but then by the time I left (I was only there for probably 10 minutes), they had taken the treats away. Womp womp. Of course, I was craving a scone now. My plan was to pick up Greek food from Zoe’s Kitchen on my way home, so I decided to pop into the Starbucks next door and get myself a petite vanilla bean scone, which is one of my favorite treats. Side note: I always forget how much more I typically enjoy unflavored drinks, especially flat whites. When we’re ordering drinks at work, my coworkers usually order fun sounding things and I always  get coffee FOMO and add some sort of flavor, but I really prefer plain drinks. STAY YOUR COURSE, RAUM! 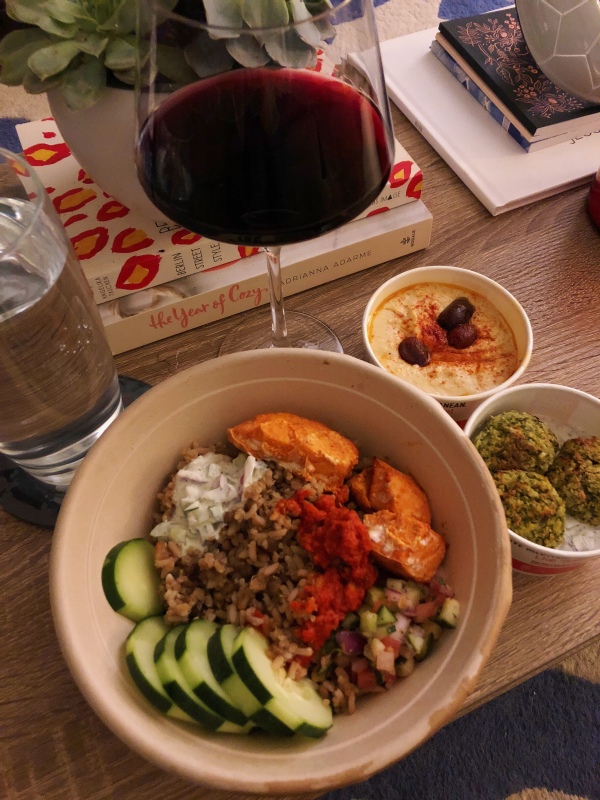 “Power grain bowl” with harissa salmon and tzatziki; side baked falafel; side hummus (pita and side cucumbers not pictured); red wine of indiscriminate varietal

I had some housework to do when I got home, so I didn’t get to my Greek feast until after 9. I ordered a ton of food as I am wont to do, but pretty much only ate the salmon and tzatziki off of the bowl, one of the falafel balls, and about 3/4 of the hummus. I did, however, drink an entire bottle of wine…whoops! 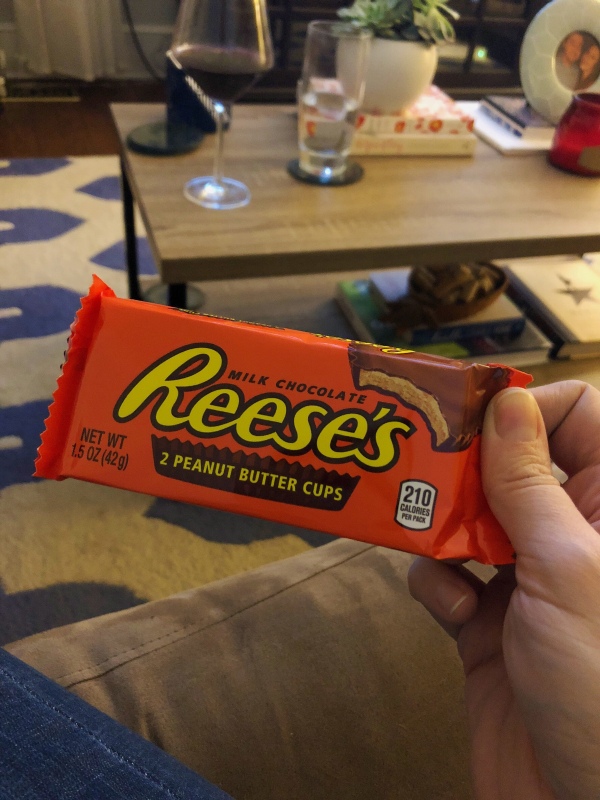 I stayed up horrifyingly late watching movies and drinking wine, so of course I was craving something sweet by around 2 AM (and I had plans the next morning…ugh). I had originally planned to whip up a mug cake or something, but it got really late and that wasn’t happening. Instead, I went to my trusty Reese’s reserve that I kind of wish didn’t exist.

That’s it for this weekend – I had a lot of social stuff going on on Sunday, so I decided to take the day off. Suffice it to say I ate all of the terrible food, and then some more. I’m starting to feel like a real garbage person, so I’m going to reel it in for at least a little while going forward…luckily (?) I have this here blog to keep me accountable. We’ll see how it goes. 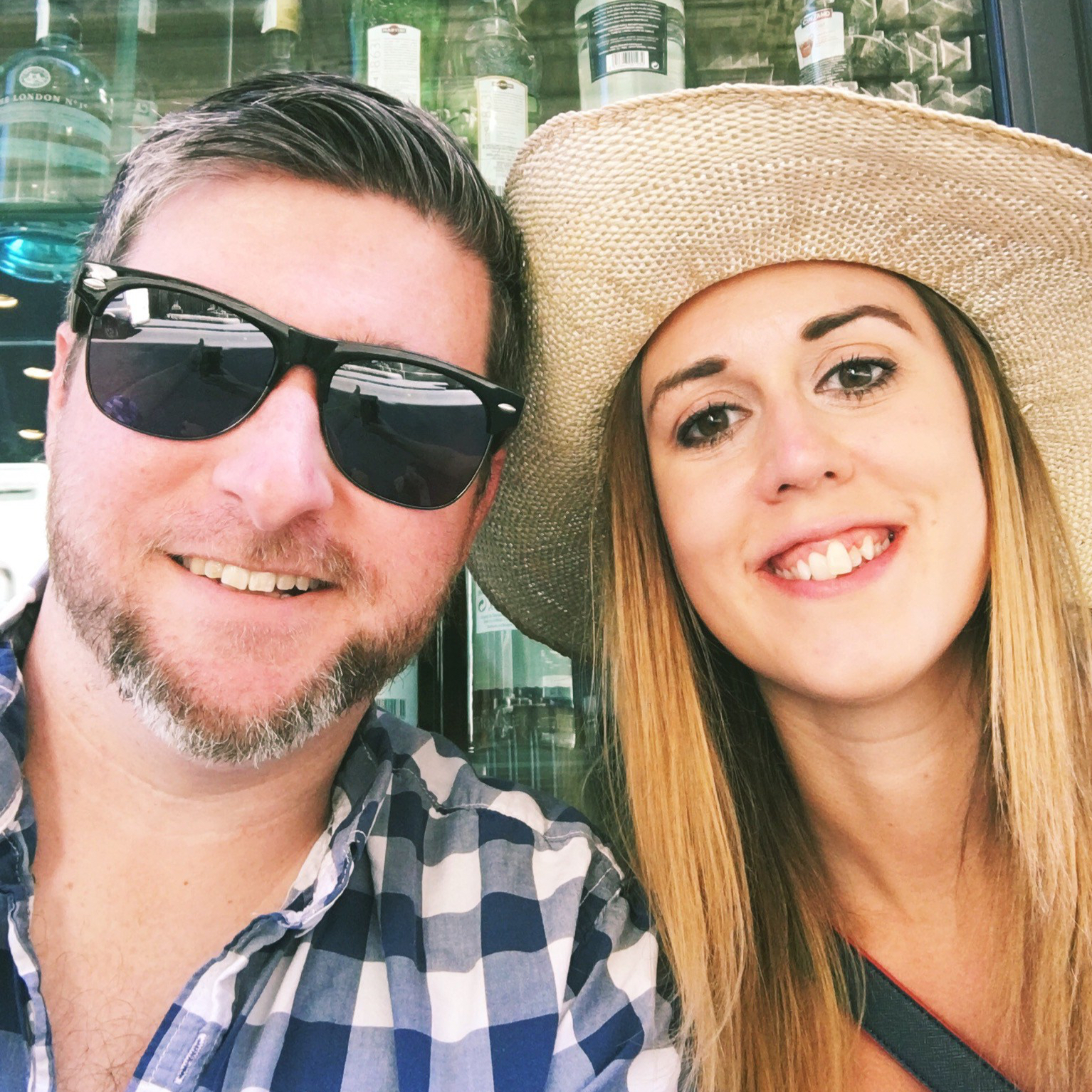