Quick note: I’ve decided to scrap the “Breakfast, Lunch, etc.” labels in favor of labeling with approximate time that I ate whatever I ate. This may be a little embarrassing (“Why did she eat a meal and then eat a full snack TEN MINUTES LATER??” “Why was her first meal of the day on Saturday at 12:30 PM and yet she still ate a meal resembling lunch at 1:15 PM?”), but I’m a big grazer and labeling a bite of ice cream as a “Snack” felt silly. So…we’ll see how this works.

I was off Friday because I had worked the previous weekend (I work every 6th weekend, which means I get a random day during the week before and the week after off). I considered switching my day off to Wednesday instead of taking paid time off to see Hamilton, but I had scheduled a hair appointment for Friday afternoon several months prior, and it’s pretty difficult to book my stylist, so I decided to keep it.

I’ve gotten into a bad habit of getting up crazy late on days that I don’t work, which I hate. As much as I love (love, love) to sleep, I’ve found that I’m much happier overall when I wake up early – those peaceful early morning hours are my favorite part of the day. Ever since I started my current position at work, I’ve been sleeping way later than I prefer – I don’t need to be in until around 9:00, so “sleeping in” for me puts me getting out of bed at around 10:30. A lot of the time I’ll even lay in bed scrolling through my phone until after 11. I keep telling myself I need to get back on a much earlier schedule and maybe go to the gym before work (I currently go during my lunch break most days), but I’ve yet to actually accomplish this. So, “breakfast” on Friday didn’t happen until almost noon, after getting up and doing a few things around the house. 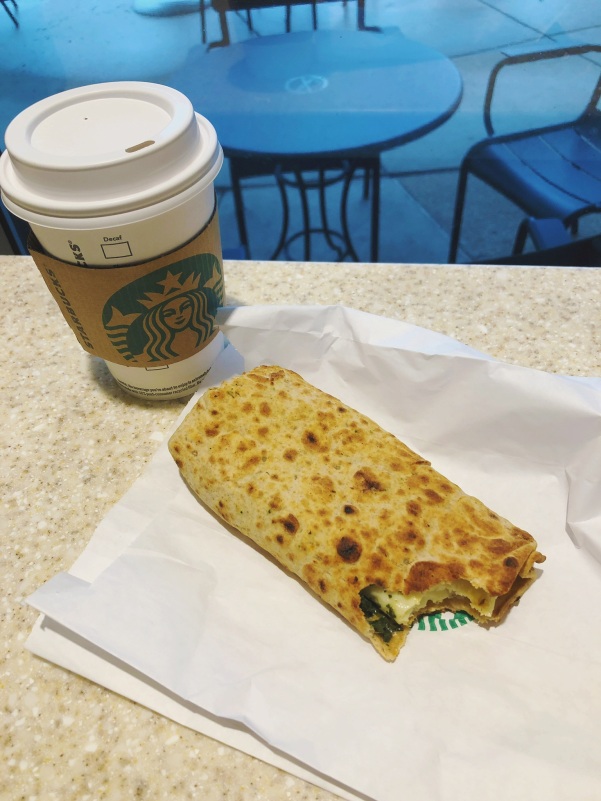 I’ll get into this more later, but my food time management on weekends/non-workdays is a mess. My hair appointment was at 1:30 and I didn’t get done until 4:30, at which point I was FAMISHED. I was so hungry, in fact, that I spent the time my hair was processing gazing longingly at menu items from Zoe’s Kitchen, which is where I had planned to grab a late lunch. But by the time I was done, I decided that 4:30 was too late for a full meal before dinner, so I just went to Starbucks and scarfed down this pretty lackluster wrap and a flat white. Starbucks is one of my only exceptions to sweetened coffee drinks – I still only get mine very slightly sweetened, but I do like some of their syrups, particularly toffee nut and chestnut praline when they have it. And yes, I do love a PSL…although I get about half the syrup in mine. 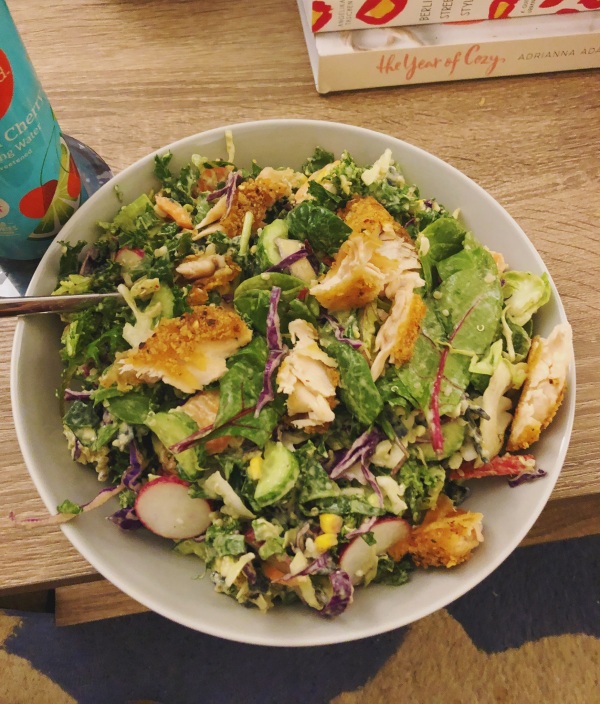 Ah, another salad. Are we sensing a theme here, yet? Okay, so I know I said Friday is pizza night…and it really usually is. I won a year’s supply of free pizza from a local pizza chain last April (funny story – I have absolutely zero recollection of entering this contest, and was convinced it was a scam for quite a while after I was told I won. To this very day, I’m still extremely skeptical that I really did enter this contest, but I mean…I’ll take the pizza!), so we’ve been eating pizza almost every Friday since. But on this particular Friday, the week was all screwy, Jeff’s stomach was feeling off and his work had catered both breakfast and lunch (neither of which he normally eats, which drives me up the wall) so he wasn’t hungry, and my body was screaming for actual nutrition, so I decided to just whip up a quick salad for myself. This one contained: Trader Joe’s Cruciferous Crunch blend (it has shredded brussels sprouts, kale, cabbage, and…I don’t know, other stuff), some sort of “power blend” greens that I’m pretty sure is meant for smoothies, the rest of that cotija salad stuff from the other night (which is where that corn you can see in the picture came from), carrots, radishes (my newest obsession), Persian cucumbers, avocado, tortilla strips, and half of a Honey Chipotle salmon filet (when I went to the store to grab salmon, I didn’t like the look of their fresh salmon so I grabbed one of those pre-flavored packaged deals). I dressed it with one of those dressings you can buy in the refrigerated aisle near the lettuce…I don’t remember exactly what it’s called, but it’s basically green goddess. I prefer to make my own dressing, but sometimes a girlfriend’s just gotta grab some pre-made crap. This was a pretty delicious salad, if I do say so myself…even Jeff looked over and said, “That’s a dope looking salad.” 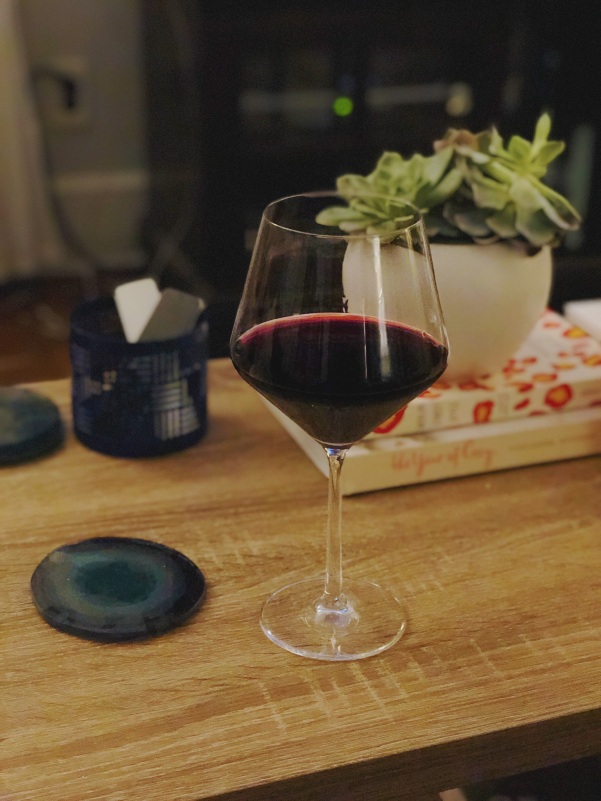 Red wine – from the same bottle as the other night, and I still don’t remember the type.

Shortly after I ate my Big-Ass Salad (TM), Jeff went over to our neighbors’ to play Risk (I graciously declined), and I spent the rest of the evening watching old episodes of The Office and talking to my mom on the phone. I actually drank about three glasses of wine or so (it’s hard to tell, because I always refill my glass before it’s completely empty), and I also ate a frozen chocolate chip cookie from my stash, which I forgot to take a picture of. But I did take a picture of…

…this cookie, which I ate right before crawling into bed (hence the bedroom pic).