Today was my only semi-normal day for the week, and I ate one of my usual two breakfasts (the other one being oatmeal SPOILER ALERT) at work. We have a pretty decent cafeteria at work with both self-service and made to order breakfast options, but I tend to stick with the same thing most days to keep it on the (relatively, save for those damn potatoes I can’t seem to resist) healthy side. Sometimes I’ll mix it up and get yogurt, or a breakfast sammy if I’m feeling really wild (or hungover). While I’ve been trying to bring lunch from home, I allow myself to buy breakfast at work every day because it gives me something to look forward to and it’s pretty inexpensive. I keep a Nutpods (Nutpod? Haha) in the kitchen on my floor and add it to the free coffee from the kitchen. 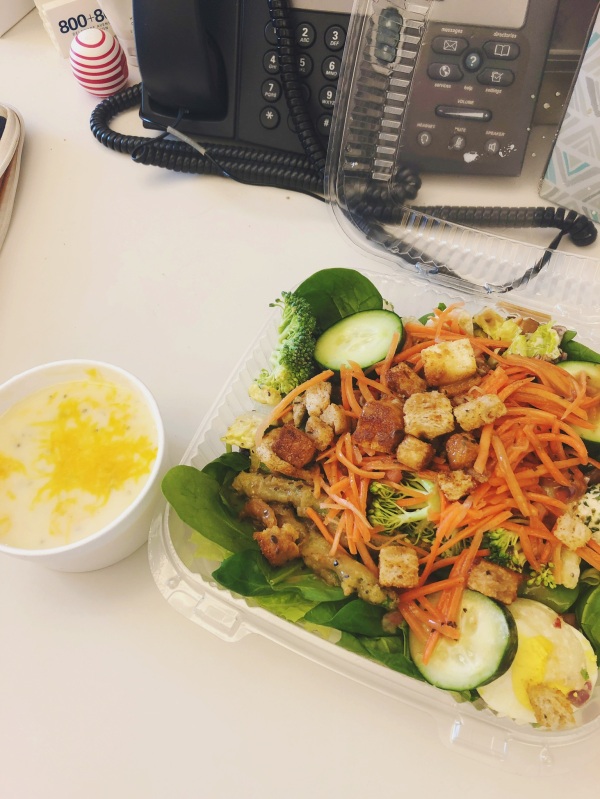 Oh boy…here we go with my salads. Lame fact about me: salad is one of my probably top three favorite foods, and I load them with pretty much every veggie I can get my hands on. For this reason, it’s gonna be pretty difficult to accurately list the toppings on my salads, but my typical work salad contains the following: spinach, romaine, carrots, cucumbers, black beans, broccoli, 1/2 a hardboiled egg, pico de gallo (this is always on the salad bar, and I use it in place of tomato and onion), croutons, and balsamic vinaigrette. Sometimes there are other veggies available at the salad bar and I add ’em, sometimes I’ll add kalamata olives and feta, sometimes I’ll add Craisins or crumbled bacon. This particular salad also contained a little portion of pre-made “BLT salad,” three breaded green bean fries, and some herb-crusted goat cheese (which I’ve never seen on our salad bar before and was VERY excited about). There are also two soups on the salad bar every day, and I grabbed a small container of baked potato soup and topped it with a little shredded cheddar. I’ve been pretty good about bringing leftovers from home for lunch, but since I only went into the office one day this week I decided to buy lunch at work (treat yo self).

I timed my lunch poorly and had to run to a meeting after eating maybe two bites of my salad (I did finish the soup, though), and while I could’ve just brought the salad into the meeting, I ended up leaving it at my desk. I did end up eating about half of it after returning, but it got a little soggy and I ended up throwing the rest away. Since I didn’t finish my lunch, I started to get hangry around 2:30 or so and wandered over to the vending machine to find something to snack on (our cafeteria closes at 2:00, but I probably wouldn’t have trekked back down there anyway). I was craving chocolate, but everything chocolate in the vending machine was crazy unhealthy, so I settled on these little snack bites. They weren’t great, but I wolfed down the entire bag.

Haha, I’m starting to realize my headings might need some work, since a lot of these entries are going to be less “snacks” and more “I ate a bite of such & such.” Anyway…I normally do my grocery shopping on Friday evenings, but since I was off this Friday, I decided to go grocery shopping after work on Thursday. Since this pushes dinner back, I’ll often grab a drink at the Starbucks inside of Target (which is where I do most of my weekly shopping) to hold me over, but I decided to forgo the coffee this week for fear of not being able to sleep. I was getting pretty hungry by the time I was done shopping, so I grabbed these pretzels that I had bought on clearance and ate a few of them in my car (this is pretty typical of me). They weren’t very good…apparently they were on clearance for a reason.

A bite of each of these.

Oh, also: when I got home and unloaded my groceries, I ate a bite of each of these pints of Ben & Jerry’s new lower-calorie line (I love half-melted ice cream, so I almost always dig in after shopping before putting the ice cream away…it’s almost always the perfect consistency by the time I get home). I guess they came  out with these to compete with Halo Top, but if you think about it, the calorie counts really aren’t that impressive – all of the “double-churned” ice creams that have been around for decades have similar (or lower) calorie counts. Still, it’s Ben & Jerry’s (whose ice cream is usually like 350 calories per serving!!!!), there are no gross artificial sweeteners or sugar alcohols like Halo Top & Enlightened use, and these were pretty tasty. Anyway, I literally ate a bite each of these before putting them away. You’ll come to see that’s how I typically eat ice cream at home – I’ll keep it in my freezer and eat it a bite at a time until it’s either gone or has been sitting in there for three months and I throw it away half-eaten. I’m a monster, I know.

I don’t usually cook after grocery shopping – it’s usually a bit late, I’m usually starving and want to eat RIGHTNOW, and Friday (when I usually do my shopping) is usually pizza night anyway. Since it wasn’t, in fact, Friday, I decided to just grab something quick from Trader Joe’s for myself to eat with the rest of the enchilada soup from earlier this week, and let Jeff eat PB&J (which he’d eat for dinner every night if left to his own devices). This salad from Trader Joe’s looked delish, but ended up being kinda meh…I ate about half the container, and added 1/4 of an avocado (left over from the soup topping), and some tortilla strips to bulk it up. I finished my meal with a glass of red wine (I don’t remember what kind, sorry). 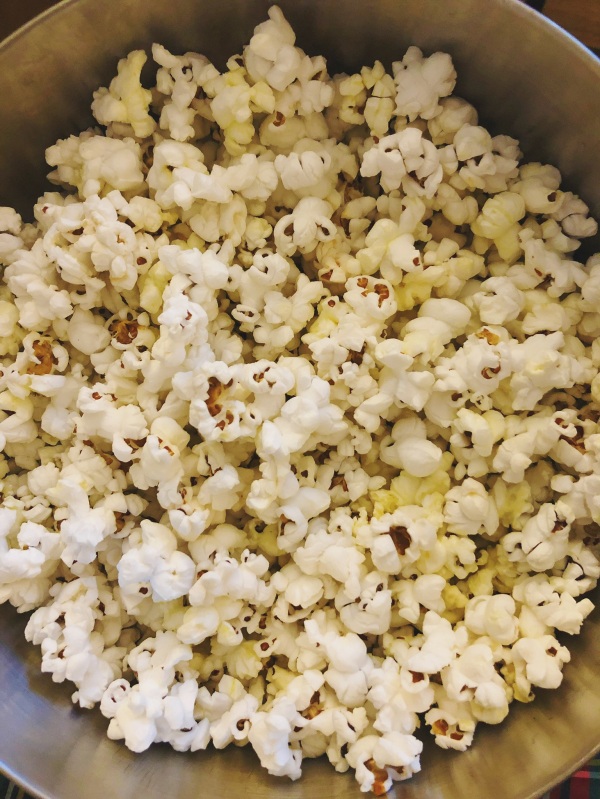 Clearly I’m on a popcorn kick…I skipped the onion salt this time, though.

For full transparency, I feel like I ate and/or drank something else after the popcorn, but I don’t have any more pics from this night. (Pics or it didn’t happen…?) Since all of these have been backlogged so far and I ate similar things a few of these days, my days are kinda running together and I can’t remember what I ate which days without photographic evidence…which proves I really do need to stay on top of snapping pics of every single thing I eat if I’m going to commit to this thing. Maybe I didn’t eat anything else this night, but if I did it was just another glass of wine or a cookie from the stash I keep in the freezer from Christmas (or both). It should also be a little easier once I”m posting these in real-time.